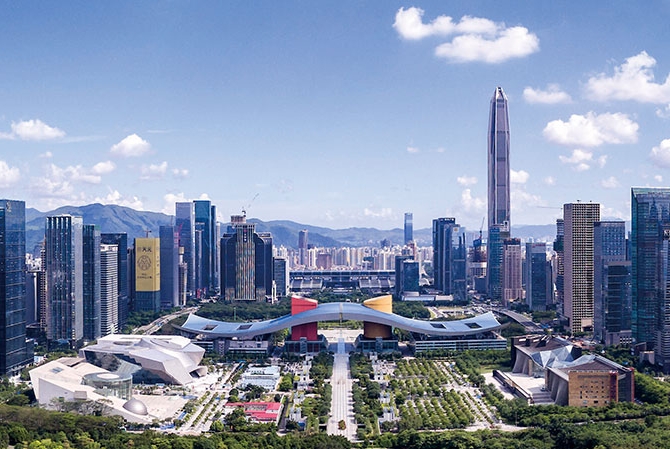 Shenzhen has been designated as a national pilot city for comprehensive reform. It is a national economic center, a science and technology innovation center, a regional financial center and a commercial and logistics center. It strives to take the lead in creating a moderately prosperous city, pushing forward the construction of the Guangdong-Hong Kong-Macao Greater Bay Area, building a pilot demonstration area of socialism with Chinese characteristics, and an exemplar city of a great modern socialist country.

Shenzhen is a coastal city in South China, adjoining Hong Kong. Its longitude lies between 113.43 and 114.38 degrees east, and its latitude between 22.24 and 22.52 degrees north. Sitting south of the Tropic of Cancer, it is in southern Guangdong Province. Demarcated from Hong Kong by the Shenzhen River in the south, it is bordered by Dongguan and Huizhou in the north, Daya Bay and Dapeng Bay in the east and the Lingding Sea and the mouth of the Pearl River in the west.

The total area of Shenzhen is 1,997.47 square kilometers. Shenzhen has 310 rivers and streams associated with the nine hydrographic systems and each with more than one square kilometer of drainage area. Shenzhen has a vast sea area of 1,145 square kilometers and boasts 260 kilometers of coastline. The city also has rich natural attractions, including the popular beaches such as Dameisha, Xiaomeisha, Xichong and Judiaosha, and nature reserves like Dapeng Pennisula National Geopark, Mangrove Nature Reserve, Wutong Mountain and Inner Lingding Island.

Shenzhen has a subtropical monsoon climate. Its weather is generally temperate to mild, with plenty of rain and sunshine. The annual average temperature is 23 degrees Celsius. The average annual rainfall totals 1,935.8 millimeters and the average yearly number of hours of sunshine is 1,837.6.

The litchi and mangrove trees are Shenzhen’s official trees and its official flower is bougainvillea.

The earliest-known records bearing the name Shenzhen date from 1410, during the Ming Dynasty (1368-1644). Shenzhen became a township at the beginning of the Qing Dynasty (1644-1911). Local people called the drains in paddy fields“zhen”or “chong.”Shenzhen literally means “deep drains”because the area used to be crisscrossed by rivers and streams. Shenzhen is also known as the “Roc City”because maps of the city’s outline resemble a flying roc with its wings spread.

Human activity in the area dates back more than 6,700 years. The area was founded as a county 1,700 years ago and is home to 600-year-old cultural relics such as Nantou Ancient City and Dapeng Fortress. The Hakka people migrated to the area from central China about 300 years ago.

Shenzhen's population increased dramatically after the city was established. By the end of 2019, its permanent resident population reached 13.4388 million, up 412,200 from the end of the previous year. Among the permanent residents, 4.9478 million are with Shenzhen hukou, accounting for 36.8 percent of the total permanent resident population, up 8.8 percent from the previous year. A city of migrants, Shenzhen is open-minded, tolerant and innovative. It is an ideal place for domestic and international talent to start businesses. It has been voted as China’s Most Dynamic City, City Most Favored by Migrant Workers and City Most Favored by Domestic and Overseas Talent.

Shenzhen is the only city in Guangdong Province where Mandarin is the dominant language, because of its huge population of migrants from all over China. Many public service employees, professionals and businesspeople speak English too. Most of the young people speak English and Cantonese. The Shenzhen Speaks Foreign Languages campaign is held across the city to encourage more residents and government employees to learn to speak foreign languages.

Shenzhen has land, sea, air and rail ports. By the end of 2019, there were 15 container berths, with a berthing capacity of 200,000 tons each in the city, making Shenzhen Port a preferred port for ultra-large container ships in South China. Shenzhen has 12 train stations, including Shenzhen Railway Station, Shenzhen North Railway Station and Shenzhen East Railway Station. Shenzhen has become an important national railway hub with the Guangzhou-Shenzhen-Hong Kong Express Rail Link, an important rail link in the country, passing through and the construction of the Ganshen (Ganzhou-Shenzhen) High-speed Railway under way. One of China’s 10 largest airports,

Shenzhen strives to build the safest and fairest cities with the best legal environment in the country. The Shenzhen Municipal Public Security Bureau has pushed forward the application of“new smart police services”and launched the “Shenwei”online platform featuring facial recognition technology to provide one-stop, streamlined and intelligent services. The bureau has put online 112 services and simplified the procedures of 148 other services, with an aim to provide convenience to local residents and improve public welfare. The Shenzhen public security bureau has been ranked first for three consecutive years in Guangdong Province in terms of public satisfaction.